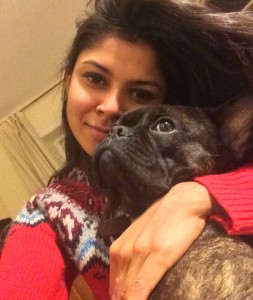 Urmee is a journalist with more than a decade of experience in TV, print, and online. She also speaks fluent Bengali and Portuguese. She lives in Brighton and London with her French bulldog, Bertie, and is working on her first novel.

You can see more on Urmee’s LinkedIn page.

Urmee runs coverage of CNN’s high-profile effort to promote the contributions of women around the world. For example, to promote women in Science, Technology, Engineering, and Media (STEM) around the Day of the Girl, she and her team created a month of specially-commissioned features culminated in a live Twitter chat with a race car driver, a start-up founder, and the White House champion for tech inclusion that reached almost 3.9 million people.

Also, she is the lead producer on Smart Business.

For AJ’s coverage of breaking news that reaches 260 million households in more than 130 countries, booking guests using personal contacts such as Gorbachev on Russia and Angelina Jolie on war rape. She coordinates globally between Doha, London, and New York.

Worked on major breaking stories such as the 2012 Olympics, the Oscar Pistorius murder case, and the birth of the first Royal baby.

Dispatches to the Daily Mail, Time Out, and others on Brazilian culture and the economy.

Covered some of the biggest stories of the past decade, from the BBC expenses scandal to the Sachsgate row.

Worked for The Guardian as commissioning editor on its G2 supplement, as well as stints  for The Observer, and others. Commended by a British judge for high journalistic standards in the successful conviction of a police officer for child sex offences. Shortlisted for UK Young Journalist of the Year, 2006. Winner of the Cornell Club of London scholarship.

The University of Leeds

Winner of the Cornell Club of London scholarship, summer 2004